São Miguel is the largest and most populated of the Azores Islands; 60% of the archipelago’s residents in fact live on São Miguel. The island is part of the eastern group of the Azores archipelago. Nicknamed “the Green Island”, much of São Miguel is a land of green grazing plains, but the landscaped is also painted with high mountain peaks, rough cliffs, rolling hills, streaming waterfalls, beautiful lakes, sandy beaches, lagoon waters, and unique Laurisilva forests of evergreen hardwoods, exotic ferns and orchids. 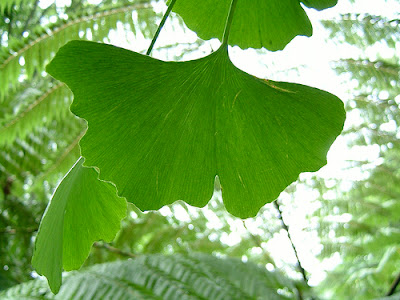 São Miguel was first inhabited by a Portuguese settlement in 1444 after it was discovered by Henry the Navigator. Interestingly, São Miguel was originally two islands, but a volcanic eruption in 1563 joined the two islands together. In the 16th and 17th century, the island was the subject of several attacks by France, England, and Algeria. It was conquered by Spanish forces in 1582 but became Portuguese in 1640 after Portugal restored its independence. Some scholars like Strabo and Plutarch, based on geology and history, believe São Miguel is the mythical island of Ogygia mentioned in Homer’s Odyssey. Ogygia in Homer’s epic tale is the home of the nymph Calypso who detained Odysseus for seven years and kept him from returning to his home of Ithaca, Greece.

Ponta Delgada is the capital of this autonomic region housing the University of the Azores. The city is protected by a long strip of land or port and lies between the mountains and the sea. The whole city is made from the black porous volcanic rock; buildings, the pepple stones of the streets and the sidewalks. As in all cities, you can find the Se or church in the town square. But the most interesting is the Museum of Carlos Machado in the Convent of Saint Andrew. This 17th to 18th c. museum has a nice collection of paintings, etchings and zoological findings. Ponta Delgada also has the airport nearby for easy access to the island. 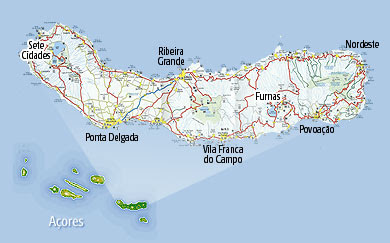 Today, São Miguel offers a wealth of attractions for tourists; at the forefront are its natural landscapes. The island is full of hiking trails in, around, and through its lakes, beaches, and middle highlands, the latter being home to the island’s many caldeiras, hot springs, geysers, thermal baths, and volcanic craters and cones that can be visited or explored.

The Furnas Valley is one of São Miguel’s natural hot spots, the location of the award-winning Terra Nostra Park. This park is the most beautiful in São Miguel and is groomed with lakes, streams, ponds, exotic flowers, primeval trees, and thermal spring lakes. The island is full of volcanic craters and cones as well like the Caldeiras in the Furnas Valley, the crater of an extinct volcano at Lagoa do Fogo Lake, and the 12 kilometer crater found at Sete Cidades Lake. The Caldeiras at Furnas Valley, in particular, are famous for being a natural kitchen; it is a tradition among the residents to bury pots of food in the earth to create specialty dishes like the “cozido” or the “caldeiradas de peixe” (fish bouillabaisse). 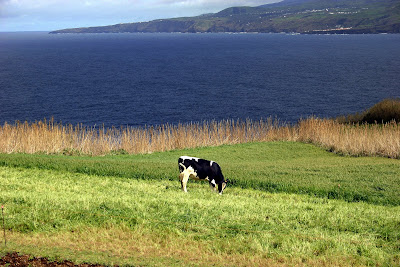 The Pico do Carvao and the Tronqueira are not to be forgotten. Both are mountain peaks that are near lakes, surrounded by forests of trees, and perfectly located for great seascape and vista views below of the coast and island. The latter, Tronqueira, has the highest point on the island, Pico de Vara, at 3,545 feet.

The beaches of São Miguel are also charming and most of them nestled among cliffs with natural swimming pools between rock shelters. Most of the beaches are located on the eastern edge of the island.
By Luis Miguens at November 14, 2007
Labels: Azores, Islands Overview, São Miguel Island